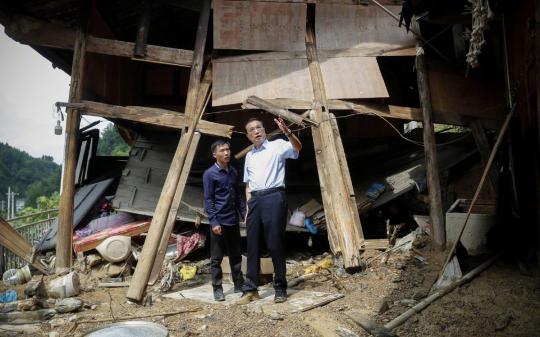 Premier Li Keqiang visits a home severely damaged by a flood in the village of Guakou in Tongren, Guizhou province, on Monday. Li's inspection tour in the province dealt with poverty alleviation, flood control, disaster relief and relocation. (Photo/gov.cn)

Premier: Virus, floods would not reverse progress nation has made

Premier Li Keqiang reiterated China's commitment to lifting all its rural population out of poverty this year while adopting resolute steps to prevent individuals from falling below the poverty line once again, given the shocks from the COVID-19 pandemic and recent destructive floods.

In remarks during an inspection trip to Guizhou province on Monday and Tuesday, Li underscored that the country will resolutely solve the difficult problems in its poverty alleviation campaign to win the battle against poverty this year.

The premier visited a flood-damaged village in Tongren and carefully assessed the losses of poor households before urging local officials to ensure that affected individuals are properly relocated and heavily damaged infrastructure is repaired.

Guizhou received the largest amount of June rainfall in 60 years, and recent rainstorms have triggered a number of floods in many areas.

He highlighted the need for heightened flood monitoring and early warning measuring as part of sound efforts for the prevention of damage from flooding and geological disasters.

Relevant government departments must coordinate government funding arrangements and support local authorities in the reconstruction of damaged homes and facilities, he said, adding that relief measures targeting poor households and hard-hit areas must be seen as a priority.

Li also visited Guizhou Beiyitong Technology Co, a producer of smart devices. The company has recruited hundreds of workers from poor households and over 1,000 migrant workers who had returned home to find jobs.

Speaking with company executives and workers, he encouraged the company to expand its production capacity, offer more jobs to migrant workers and help with the nation's poverty alleviation campaign. He also urged workers to remain enterprising and master more professional skills.

The job market is an economic issue closely related to people's livelihoods, and authorities at various levels must resort to all means at their disposal to protect jobs and create new ones, he said.

While visiting the Tencent Data Center in Guiyang, the provincial capital, Li called for government departments to bolster support for new types of infrastructure and offer strong support to the growth of emerging sectors such as big data.

He learned about local government efforts to streamline administration, bolster compliance oversight and services and offer one-stop services online at the provincial administrative service center, where he talked with individuals assessing services and some staff members from small and medium-sized enterprises.

The premier called for measures to solve the financing difficulties faced by small and medium-sized enterprises as well as businesses in the science and technology sectors.

The country must rely on reform and opening-up to create more space for the development of its western regions, he added.