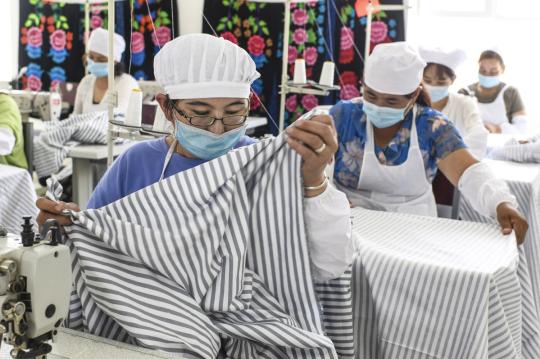 A top anti-poverty official said on Monday that employment of rural workers has been made a top priority as China races to meet its goal of eliminating rural poverty by the end of the year.

Ou Qingping, deputy head of the State Council Leading Group Office of Poverty Alleviation and Development, said the number of farmers in the less affluent central and western provinces who have found urban jobs reached 28 million this year, higher than last year's total.

Of those farmers, more than 10 million have migrated to other provinces, he told a news conference held by the State Council Information Office in Beijing.

"At present, the migrant worker situation is relatively good," he said. "The Chinese market is large, and there is great room for maneuvering."

The situation also looks promising in the 52 counties that still retain the poverty label. Ou said 2.85 million farmers from these counties have found jobs outside their hometowns, 12 percent higher than last year's total. The data is 7 percentage points higher than the national average.

The progress report came after the novel coronavirus epidemic halted operations at factories, restaurants and hotels, strongholds for such workers earlier this year. The epidemic has forced millions of migrant workers who contribute the lion's share of rural income to sit idle at home unpaid, threatening to impoverish many.

To ensure that China ends domestic poverty on schedule, Ou said his office would continue to work with employment and other relevant authorities to help enterprises hire large numbers of migrants.

Ou said the office would make sure such employers enjoy favorable policies such as tax breaks and exemptions from paying social security fees.

Efforts will also be made to promote cross-regional cooperation, Ou said, citing as an example the Guangxi Zhuang autonomous region, which has worked with neighboring Guangdong province, a manufacturing hub, to find jobs for its rural workforce.

The moves come as China enters the last leg of its yearslong anti-poverty campaign, which aimed to eliminate rural poverty before 2021, the centenary of the Communist Party of China.

Huge progress has been made in curbing rural poverty. Between late 2012 and the end of 2019, more than 90 million rural poor escaped extreme poverty.

The progress enabled China earlier this year to focus its energy on the 52 counties still labeled as impoverished. Measures to help these counties include offering more funding and manpower to help bolster the accessibility of the most basic public services, such as compulsory education, healthcare, safe housing and clean drinking water in these places.

According to the anti-poverty office, all residents in those counties now have access to clean drinking water, and about 1.2 million farmers have been relocated to newly built homes that are safe and close to factories that offer jobs as well as hospitals, schools and other public facilities.